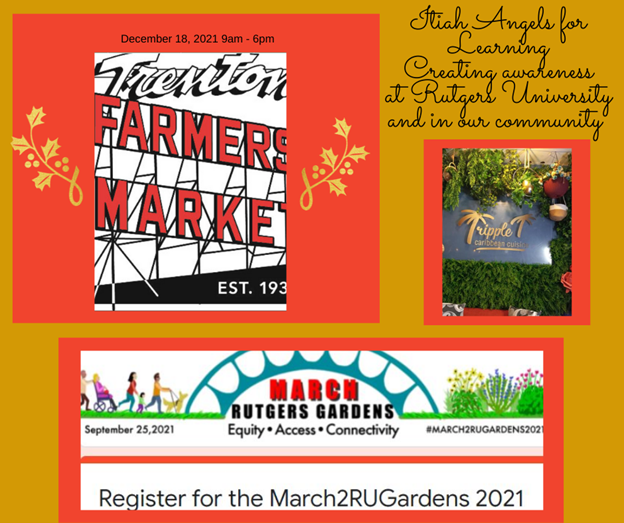 IAFL has participated in many events this past fall season. On September 25th, IAFL visited Rutgers University’s Cook Campus on the March to Rutgers Gardens, an event to raise awareness of a safer walking route from the university to the gardens. It was a fellow at IAFL, Unaisah Quazi- a third-year student at Rutgers University, who organized the event to establish IAFL’s partnership with the university. Here, participants of the march were able to enter our raffle. IAFL also was able to seek more volunteers and donations for the organization. The march started bright and early in the morning and featured an array of speakers. When participants began to walk, they were greeted with Fluxus cards, barn animals at the Cook farm, and amazing performances by Rutgers students. One part of the march required passing through a cow tunnel that was lined with a choir; they sounded like a chorus of angels when participants passed through. On the other side of the tunnel, attendees were met with contemporary dancers and artwork. Finally, when the Rutgers Gardens were reached by crossing the road, attendees were rewarded with music, food, and vendors, including IAFL’s table. Overall, it was a beautiful day and was filled with fun!

On a different day, IAFL gave a tribute to Caribbean history and culture by partnering with Tameka Nicholson and her restaurant Tripple T, a Jamaican restaurant in Robbinsville, NJ. The event was a fundraiser in support of IAFL and was held on September 24th. The event was called “A Night in Haiti,” featuring Haitian artifacts and Kompa music. The restaurant also had a Haitian DJ, DJ SMASH, who provided music for guests to dance throughout the night. Guests were also served with jerk chicken, rice and beans, and sautéed cabbage. For each platter that was purchased, IAFL was given $5 a donation.

IAFL will host two different events, before the end of the year. A Festival of Thanks & Giving is scheduled from November 20th to December 4th. Please go to this link for more information https://bit.ly/305jsE5. On Saturday, December 18th, a holiday charity event will take place at the Trenton Farmers Market at 960 Spruce Street in Lawrence Township from 9 am to 6 pm. If you are in the area, please stop by and say hello.

Finally, IAFL’s founder Marie Thadal was surprised with a birthday party in October. The organization received $1,795 as part of her birthday fundraiser. Seventeen Facebook friends donated $931 and 2 two Friends of ITIAH sent a check totaling $600, up to $260 in cash was donated at the birthday party. This amount collected will go to the well-project fund.

IAFL will continue to partner with more communities and host more events in the coming months!